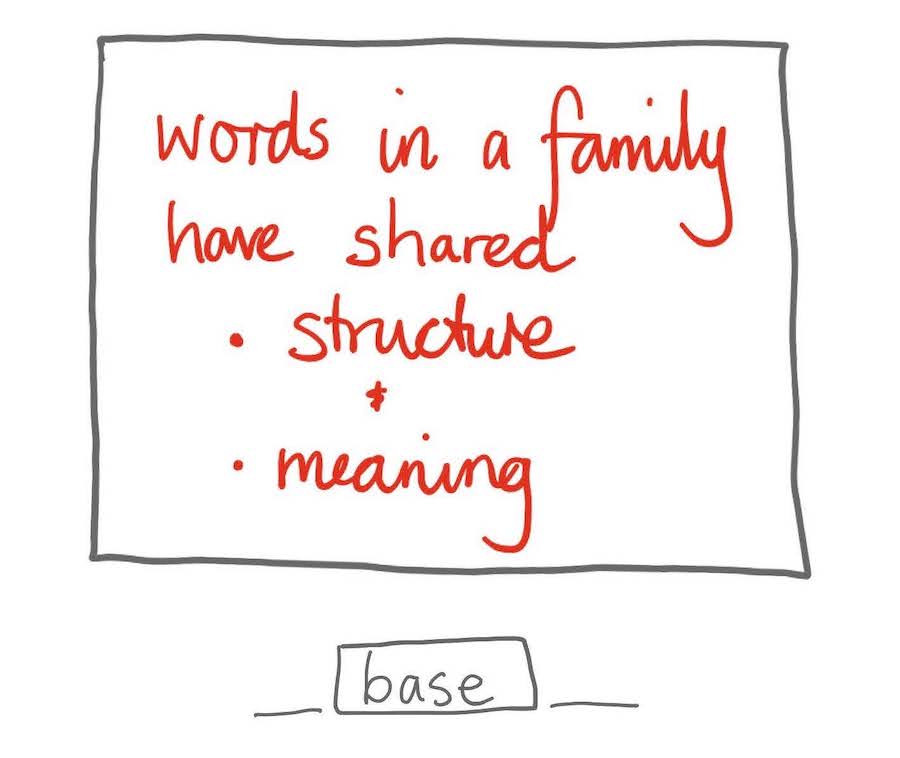 One of the big concepts to establish with students is that of morphological word families. It deepens comprehension when they can see links between words. Looking at the spelling of a group of words, without considering their meaning or their morphemic make-up, focuses only on surface structure and leads to misconceptions.

Understanding that morphologically related words must share structural and meaning links is vital. When you make word sorts it’s useful to add words that share meaning but not the spelling of the base and vice versa.

If you would like to increase your confidence in identifying words that are morphologically related join my next online workshop on Finding Families.

How to sort words in a family

In this video I am presenting a challenge you could give your students - to come up with their own in-out word family sort. I go over how to sort words in and out of a family so you could show them this directly and set their challenge for the week.

An important part of Word Inquiry is giving the children the language to be able to explain their thinking. This takes time and practice! Don’t assume because they can’t explain something they don’t understand but also don’t assume they do. I feel we too often think the latter (the pitfalls of sympathy) and maybe their lack of clarity reflects misconceptions or still-jumbled thinking. One thing I feel sure of is if we give students specific word inquiry language it will help them on this journey. Model it in your explanations and scaffold them with this language when they are struggling to explain their thinking.

If you have students make their own in-out word sort and then record themselves talking through their thinking you’ll certainly learn a lot from the words they come up with and the way they sort them. This will give you next steps in your instruction.

You’ll see from the following videos an in-out word family sort can be super simple or more complex. It’s not important to fully resolve all the answers, in fact a few wonderings to ponder over is fine! 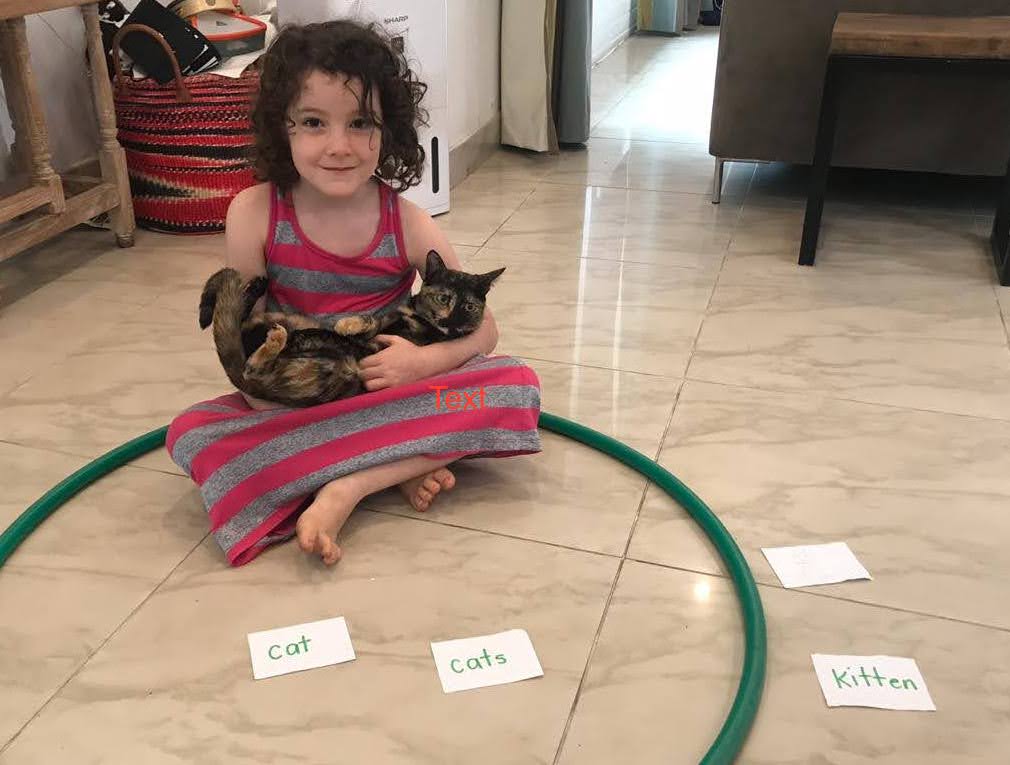 In this video 5-year-old Harriet sorts some words in the <cat> family. Her people family has some cats and so she is a bit of an expert in this area. She came up with the words for her sort, says “I’m going to sort words that have to do with cats” and has no problem sorting which words are in and which out but you’ll notice she doesn’t yet have the language to fully explain her thinking.

I am fairly sure she knows that kittens are baby cats and yet, after pausing, she says <kitten> is out because they aren’t really cats. I am guessing she is not yet able to explain they are linked in meaning but the word does not share the base. Similarly she says <cats> is related because it shares the letters, which is true but only part of the reason - it also shares meaning. <scat> for example shares the letters of the base but wouldn’t be in this family. 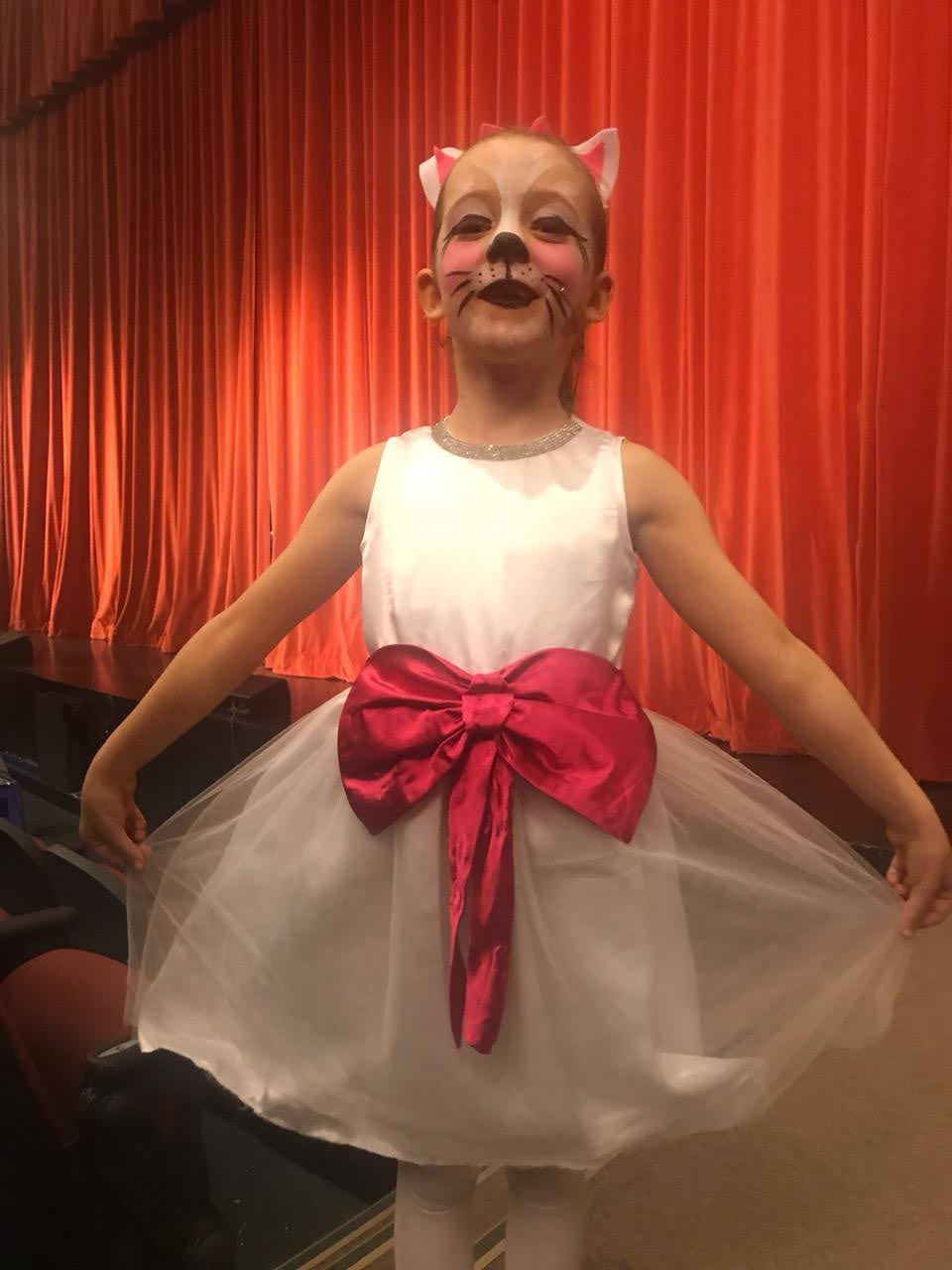 In this video 8-year-old Stella sorts some words in the <act> family. She has recently been in a play at school and I love the way she defines the word before she starts. Her frame of reference for <act> is about dramatic performance.

She initially sorts her words based on structure - if they have the letters <act> in them they go in the family and words such as <watch>, <play>, <stage> and <character>, linked in meaning alone, are out. She included the word <practice> in her word set and puts it out but second guesses herself as she looks carefully and realizes it has <act> in it.

She then decides to check her initial sort and with her specific definition she struggles with two words: <action> and <active>. Of <action> she says ‘3 2 1 action’ but then just isn’t convinced it links in meaning. And of <active> she says, ‘I’ve been in a play and I haven’t really heard people saying ‘be more active’, yeah.’ and so she leaves them on the line showing they might be in, she’s just not quite sure. Next steps might be to broaden her understanding of this quite complex word. It comes from the Latin agere with a sense of “to set in motion, to do, perform” and we use it quite broadly actually.

She justifies <react> being in as you ‘re-act during rehearsals’, I suspect giving it a sense of acting again rather than a response to something as we more frequently use it. She perhaps doesn’t know this sense of the word yet and the former makes sense. Anyone who’s ever been in a play knows you re-act often!

Although you can’t see it clearly she has, seemingly without realizing, included both <actor> and <acter> in her set of words showing she intuitively knows how to spell the word yet also knows we often use <-er> to denote the agent suffix.

Her mother asks her to try and explain why she decided to leave <practice> out of the family and she struggles a little to explain her reasoning. As is typical of our students, she uses ‘it’ broadly referring to both the word and the base. She says, “Usually because if it was in the family, the umm... it would be in the middle, or at the end or at the beginning and in <practice> it’s in the middle, but this is actually a word and if you take the <act> out of <practice> it won’t be a word.”

Here she is implying perhaps it does share structure as <act> is in the middle like other bases that have a prefix and suffix but it doesn’t share meaning. She might also be implying she doesn’t know the other ‘parts’ to be affixes as she suggests taking <act> out of <practice> to check (which doesn’t make sense really but does show an understanding of morphemic structure). She’s definitely getting to the idea that <practice> does not behave like the other words with the base <act>, rather she sees it as a base by itself and that’s why she has placed it outside the family.

Continued scaffolding using specific language such as base, prefix, suffix, structure and meaning will definitely help her explain her thinking. Stella’s struggles with a few words actually show her to have some very sophisticated thinking around the concept of word families. She clearly knows words need to have shared meaning and structure to be related.

These photos show 8-year-old Matilda making an in-out sort for the <wonder> family. See how she has included a quick sketch to show she knows the meaning of the base and this will help her decide words both in and out of the family. She also knows how to write word sums to show the structure of the words in the family.

I asked her parents to find out why she chose <wonder> and she said that when they were asking her what words she was wondering about she heard the word wonder and thought, 'That is an interesting word’ and it made her think straight away, ‘What is the base? Is it the number one?'. It appears she decided it was not. I notice she included the homophone <won> in her ‘not in the family but some people might think they are’ words, probably realizing it looks like it might be the base. 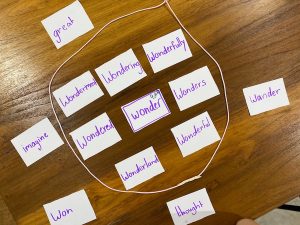 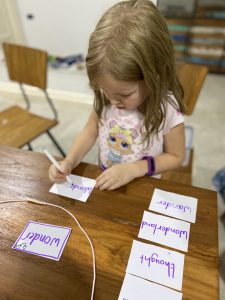 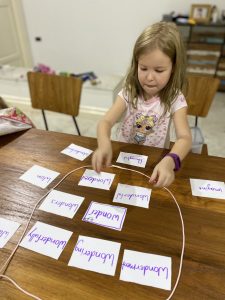 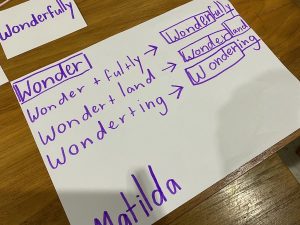 This video is a quick summation of a word sort with the <sun> family.

Encourage your children to send me one photo of their finished sort and I’ll add it to the website. Of course parents can join in and help but remember it’s not about perfection, rather about building conceptual understanding and it’s fine if children get some words in the wrong place or wonder about ones the adult knows where to place. They could be encouraged to put them on the line if unsure. 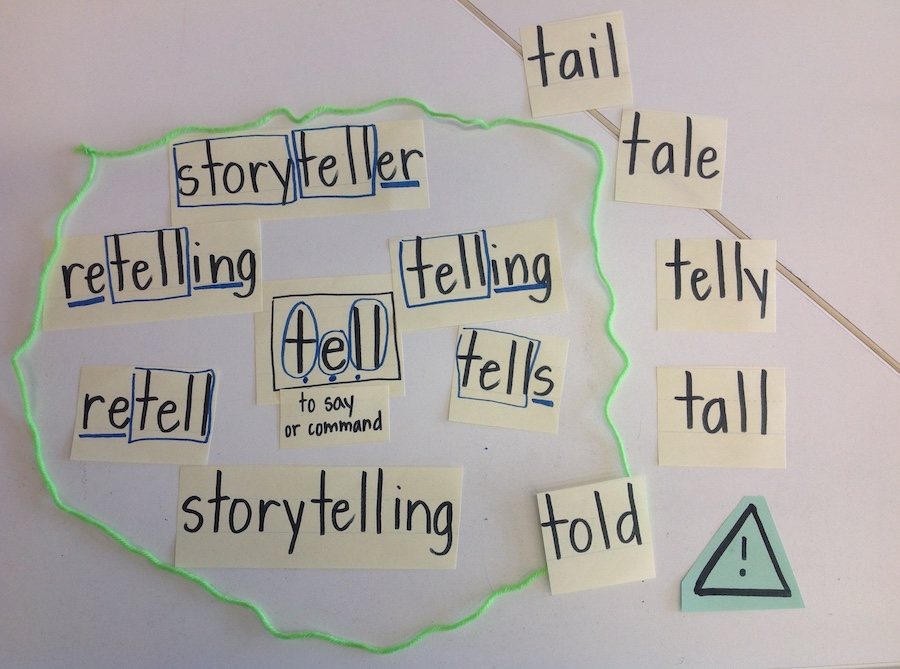 Thanks to Grade One at Hong Kong Academy for this in-out sort with the <tell> family. It was linked to their How We Express Ourselves storytelling unit of inquiry. They were unsure of how <told> fits in the family so put it on the edge. 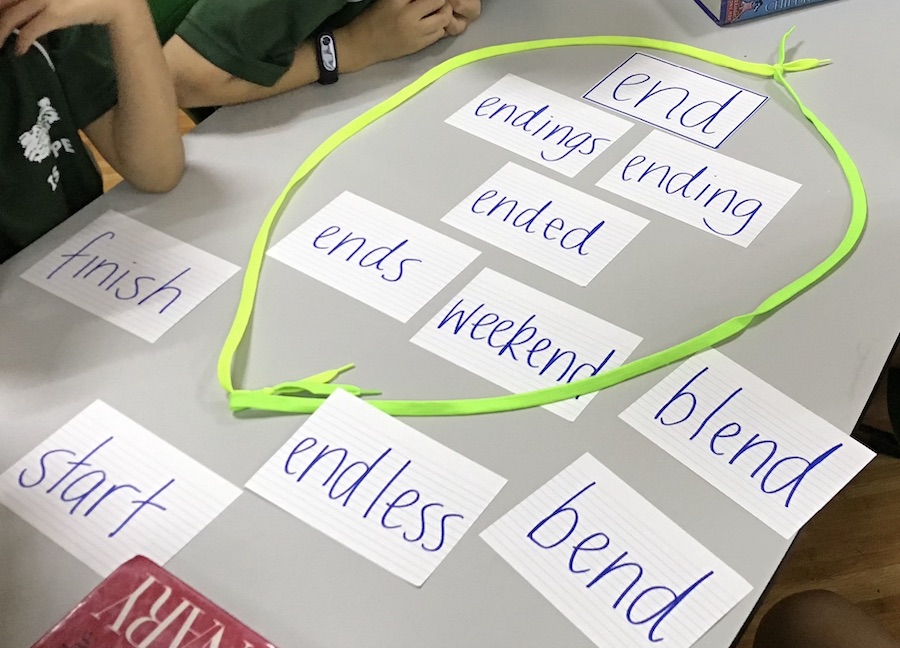 Thanks to Grade Four at International School Manila for this in-out sort with the <end> family. This was captured mid-way through their first experience of finding related words. They weren’t sure about <endings> until someone grabbed a Choose Your Own Adventure book.