A while ago I was in a Year 6 class in a school where all the students at some point in their last year in elementary school get the opportunity to serve in the Student Council. Students are empowered as they learn to take minutes, run meetings, and implement projects for the betterment of the school and the community. In a nutshell, they all get to develop their leadership skills rather than the usual few ‘elected’ student representatives.

Anyway, as this group of students were discussing what to lead means ("to guide" Old English lædan) the word leadership came up. A lively discussion ensued about whether ship meant a boat in this word or not. They also wondered if leadership was a compound word as they could see the structure quite clearly.

The teacher guided them to make a hypothesis about the meaning of ship (or meanings for those who felt it had a different sense in different words) and then collect data to test. This investigation continued for some days as they found words with ship in them and thought about their meanings and then tested their findings with even more words. You can also present the students with some words to speed the process up, given that time is always of the essence in our classrooms.

There are two quick ways to get an indication of the meaning of a word: to sketch and to use the word in a sentence. In the case of words with ship in them it’s quickly apparent that words such as friendship and leadership are not literally boats, nor do they carry a sense of transportation. In fact, unlike the words that indicate a type of boat, to draw them is challenging as they are not so concrete.

The ship in words like cargoship is a free base; it can stand on its own as a word. We show its structure like this: <ship>. Some words in the family include: ships, shipbuilder, shipbuilders, shipmates, shipwright, shipment, shipwreck, battleship, steamship, spaceship, starship, flagship, warship, shipyard, shipping, shipped, shipper. As a base <ship> often compounds with additional bases both before, e.g. <battleship> and after, e.g. <shipwreck>.

This ship comes from an Old English (OE) word scip and still means just as it always has - “boat”. Originally all boats were called ships but now we refer only to very large boats by this term. This ship also functions as a verb meaning to transport people or goods. In Present Day English (PDE) this sense is extended beyond the sea to land and air. 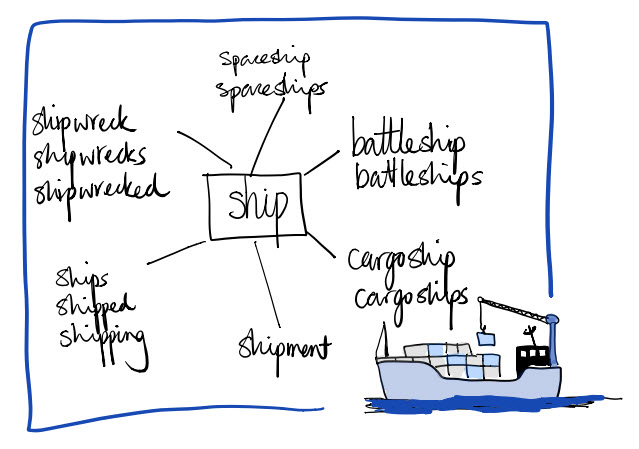 The ship in words like leadership is a suffix. We show its structure like this <-ship>, adding the hyphen to indicate it must be bound to another element. Some words created when <-ship> binds to a base include: ownership, membership, friendship, leadership, ladyship, lordship, penmanship, censorship, stewardship, hardship, musicianship, township, entrepreneurship and workmanship. Not many new words use this suffix, although relationship in a romantic sense is a more current example.

This ship also comes to us from Old English (OE) and, as described in Etymonline, means "quality, condition; act, power, skill; office, position; relation between.” It forms nouns that as far as I can see are all abstract. When the students in that Year 6 class sketched their pictures of the words with the suffix <-ship> they quickly discovered they had to write some words or add details to show the meaning, as a picture of a group of children doesn’t necessarily show they have a friendship. They realised to draw them was quite challenging as they are referring to the state, condition or skill of being the preceding base. This helped to convince them that this <-ship> was a suffix and very different in meaning from the base <ship>.

That said, in the way that language usage shifts, this suffix is finding life as a base in the world of fan fiction. The desire by fans for fictional or real-life characters to be in a romantic relationship is called shipping. The first evidence of this usage is in the late ‘90s and a prime example is the desire of Harry Potter fans for Harry and Hermione to be in a ship. Currently twitter fans of A Star is Born are shipping on Bradley Cooper and Lady Gaga getting married in real life. 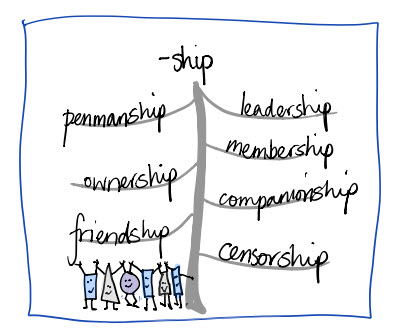 Print the sheets that are relevant for the group of students you have. Any sheet I produce is intended as a starting point - not as a definitive way to conduct the lesson. For example, this could easily be an oral discussion with each word written on a card. A group of children could take one card, discuss its meaning and draw a picture. The group or class could then come back together and discuss the meanings of the words, then organize them accordingly. A tangential and potentially passionate discussion could revolve around words with the suffix <-ship> that include <man> such as horsemanship, sportsmanship and chairmanship.

Othographic inquiry is such an interesting way to deepen our relationship with words!