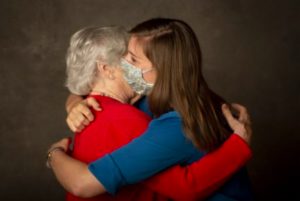 The word of the year in Belgium is “knuffelcontact”. What exactly is a ‘knuffelcontact’ and what does this have to do with English? Well, let's start with, in English, it means a cuddle-partner, someone you can include in your bubble during lockdown.

I tend to agree with Jenny-Lee Moore when she says it's undoubtedly the best new word of 2020. In fact I think we should adopt it into English, not only because it rolls nicely off the tongue but if you have to be in lockdown then people who live alone should definitely have one.

My Belgian friend Nadine enlisted her young friend Juul to help us understand the meaning of this new word.

Another intriguing Dutch word of the year is from the Netherlands: “anderhalvemetersamenleving” or “1.5 meter society”. They both seem to far outstrip dictionary.com’s “pandemic” or the Oxford English Dictionary that stated it was such a year that a single word couldn’t be selected, although “unmute” was apparently a strong contender.

What about English words that start with <kn>?

“Knuffelcontact” is interesting in more ways than just pandemic language. That you can hear the pronunciation of the <k> contrasts with the words we have in English that start with <kn>  as they always seem to be pronounced /n/.

In fact children, and teachers, often wonder why that <k> is there at all. If it’s not pronounced then where did it come from?

If you take a moment to brainstorm as many words as you can think of starting with <kn> you’ll probably come up with a list that includes words such as:

And if you think a moment longer you’ll realize that we have many homophones for these words so the different spelling does help to distinguish the meaning.

But why is it a <k>? Why not another letter? Well it turns out that long ago we did use to pronounce that <k>. Etymonline tells us it became standard to just say /n/ around 1750. The spelling probably persists as it really helps to distinguish a <knight> from the <night> or <know> from <no>; after all clarity of meaning is paramount in English spelling.

<kn> is still evident in many languages of Germanic origin with the <k> pronounced. Take our word <knee> and listen to the pronunciation of this part of the leg in some of the following languages:

So the big question I know many of you are now wondering: how should we pronounce Knuffle Bunny? 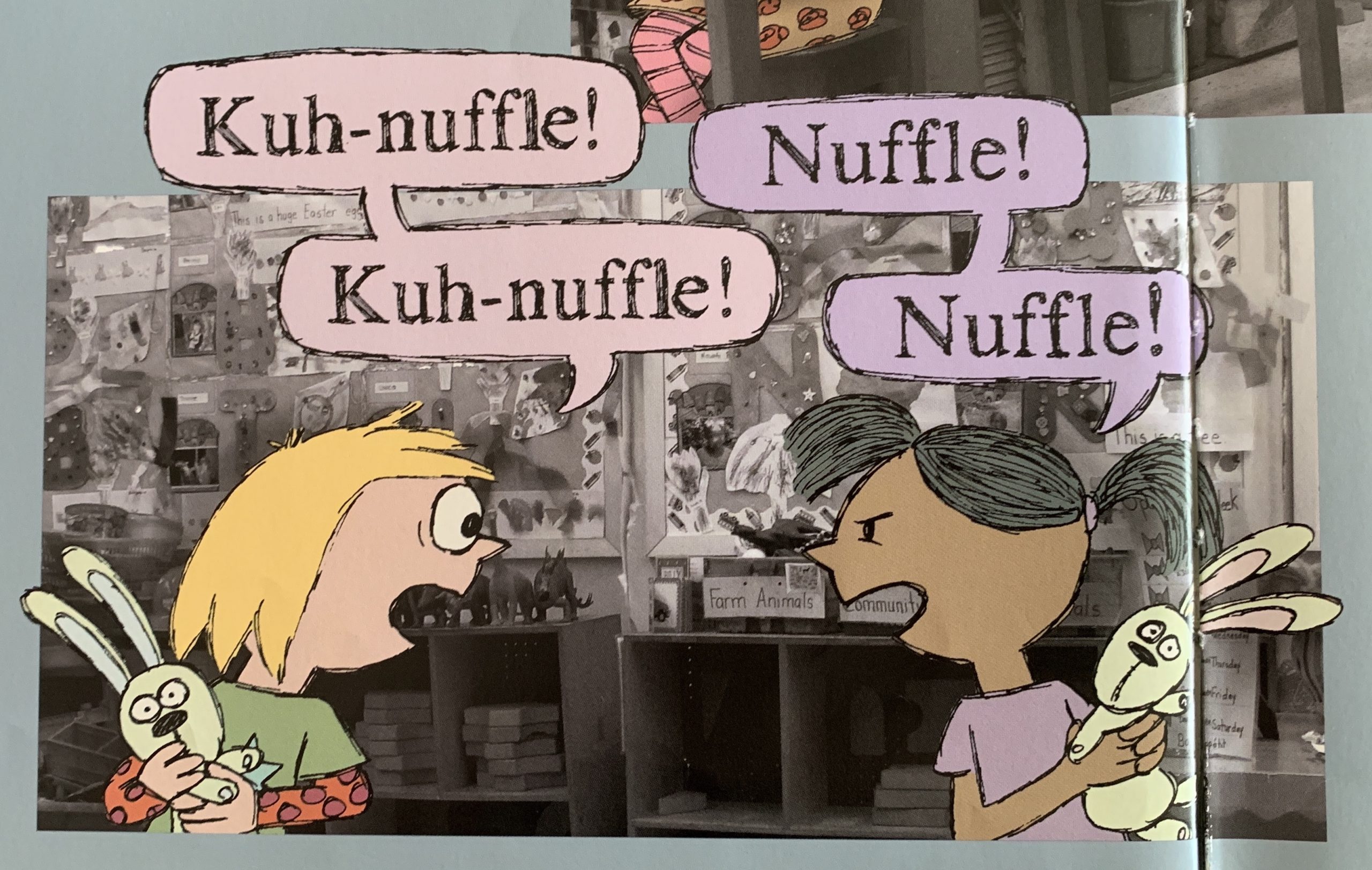 On his blogspot, Mo Willems had this to say on the matter:

By now those of you who don’t read Dutch, will already have realized that the Dutch spelling is <knuffel> yet the spelling becomes <knuffle> in his book. Although we do use <el> at the end of words in English, it’s way more common to use <le>.

In an interview with NPR, Mo Willems said: 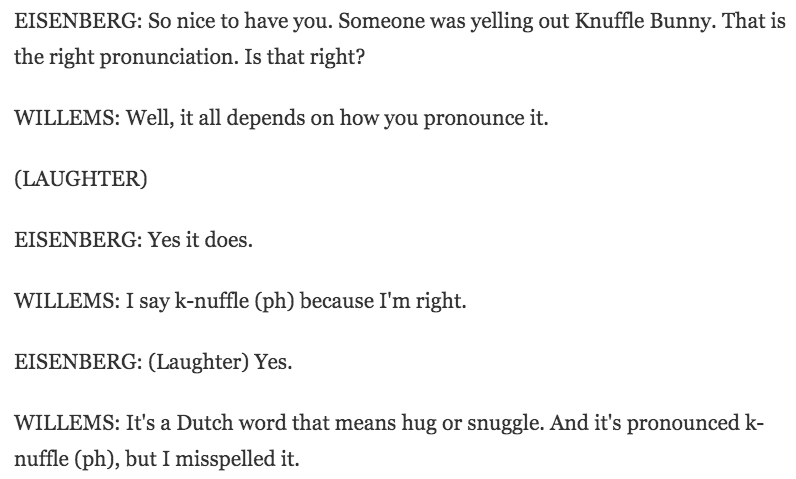 <Kn> is one illustration of how peering into the past and learning that ‘words have stories’ can really help our students to understand English spelling, no matter their age.

Misty Adoniou reminds us, ‘English spelling is neither chaotic nor illogical. As a morphophonemic language, English is quite systematic and unendingly fascinating. The system, and the storying, behind English spelling should be shared with children from the time they begin to engage with print.’

So in these trying Covid19 times, while you are snuggled down with your knuffelcontacts, share the story of <kn>, but remember that ‘cuddling’ and being kind to each other is more important than pronunciation!

Thanks to Nadine Arnou for her guidance with this post, to Juul, Oscar and Suzanne for starring in the video but in particular Juul for his explanation of  “knuffelcontact” and to Tine for making the video.

Thanks also to Annemiek, Hanne, Hannah, Gunilla, Malin, Kit and Martin for letting us know the word for <knee> in their mother-tongue and how it is pronounced.